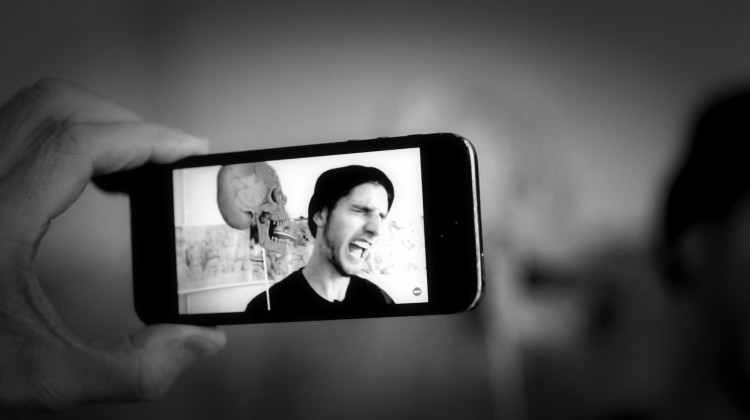 He is a true pioneer. Sutu has been exploring interactive comics for a decade now, but his innovative approach to storytelling transcends his medium of choice. His stories are relevant to anyone interested in the art of interactive storytelling. We talked to the artist in Haarlem at our exhibition ‘Motion Comics – The Beginnings,’ (which you can still see until the 24th of July).

Sutu’s been on our radar ever since he unleashed Nawlz upon the world, that ambitious beast of a techno punk comic. Nawlz (2008) tells the story of a man lost in a futuristic city. It was released online in two installments of multiple episodes, and served as a major playground for its creator, who seemed to have poored every single good idea he ever had about interactive comics into the giant storyverse that is the city of Nawlz.

Earlier this year, Sutu released These Memories Won’t Last, a moving story in which he captures the fading memories of his ailing grandfather, who suffered from Alzheimer’s. It’s his most personal story yet and arguably one of his best works. “Memories” exemplifies, to me at least, why interactive comics is a unique storytelling medium in its  own right. Sutu received an Eisner nomination for it (the Oscars for comics).

What is especially interesting about Sutu’s work is that his stories always complement the technology. Modern Polaxis is another great example – an interactive comic that uses alternate reality technology to reveal hidden story layers. “I don’t want the effect just to be a gimmick,” says Sutu in the interview. The Australian artist is now working on an AR art book titled “Prosthetic Reality,” for which he has put out an open call for submissions from other creators.