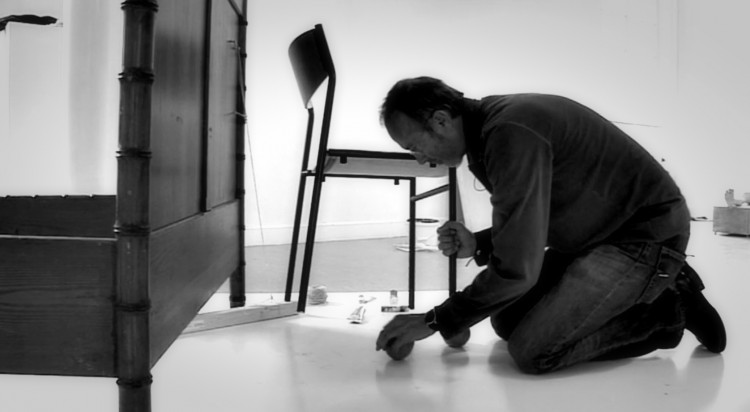 “I knew from a fairly early age, about 15 or so, that I wanted to be an artist. The problem was, my father was a detective in the police. In his view, artists were almost as suspect as criminals”, explains Austrian artist Edwin Wurm. He obviously withstood his father’s objections to his artistic ambitions and followed his vocation. Good for him and for us, because Edwin Wurm is now one of the most successful contemporary artists in the Northern hemisphere.

We too love Edwin Wurm. He’s right up there with the zeitgeist. He speaks our language – the language of pop culture, tv, movies, comics and science fiction. And even though he’s had solos at some of the most prestigious museums and art galleries around the globe, Wurm dares not to take art, the art world, or himself all too seriously. “I want to reach more than just an elite circle of insiders”, says Wurm. And he did. Even if you’ve never seen one of Wurm’s shows, you’ll still know his work indirectly from The Red Hot Chilli Peppers’ ‘Can’t Stop’ music video. The video is nothing less than a tribute to Erwin Wurm’s work. It’s filled with Wurm-style concepts and sculptural jokes inspired by his one-minute sculptures. Big Kudos to the Peppers for recognizing the influence Wurm had on their video.

This one-minute sculptures project is our biggest favorite. Proving that you don’t need to carve into a hundred tons of marble for six months to make a nice sculpture, Wurm does one in a minute. These quickie sculptures are based on simple, but powerful ideas that involve one or more models posing with objects in a unusual way for nothing more than a fleeting moment, really. Wurm documents his ‘sculptures’ on camera. What’s you have, then, is a photograph that’s part of an ongoing series of intriguing, original images that just hijack your attention.

Watch the interview and see how Wurm arranges the art works for his solo show in museum Het Domein, and see how Wurm is trying repeatedly, though unsuccessfully, to create what he calls a toothbrush launching pad by carefully balancing a tube of toothpaste, a chair, two oranges, and a bed into a fragile looking sculptural configuration. (text: Remco Vlaanderen)